You are here:
ASAPbio newsPeer review 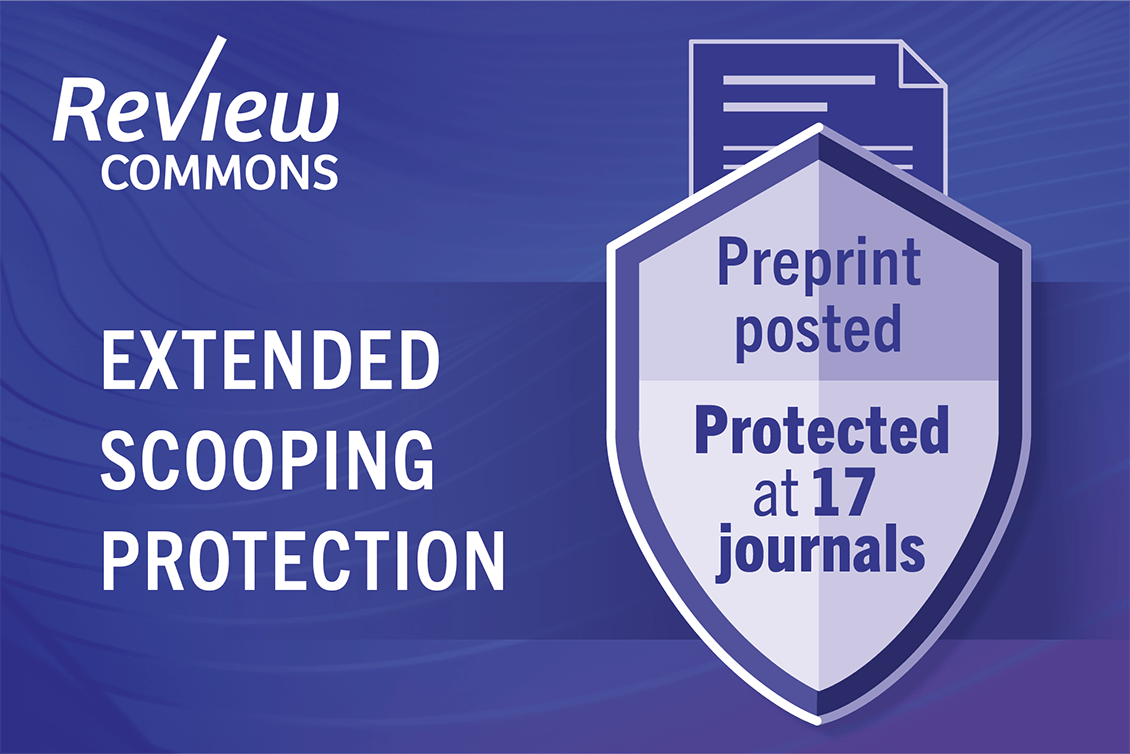 This post originally appeared on the Review Commons blog.

Review Commons is announcing two new policies today: As of August 1, 2021, Review Commons will require all authors to post their manuscript as a preprint, prior to transfer to an affiliate journal1. In return, all the affiliate journals provide authors with scooping protection from the date of posting of the preprint.

“It was a logical step for Review Commons to complete this integration with preprints and go preprint-only to promote open science,” says Thomas Lemberger, Review Commons project leader and Deputy Head of Scientific Publications at EMBO Press. “We would like Review Commons to review manuscripts that will all be made available in the form of a preprint as early as possible, and this means before journal publication.” Those authors who prefer not to have their manuscript posted as a preprint can withdraw their work from the Review Commons pipeline and proceed with a conventional submission to any journal, including any one of the 17 journals in the Review Commons consortium – with the advantage of having expert criticism to help improve their manuscript. Importantly, while posting a preprint will now be required to submit to one of our affiliate journals through Review Commons, posting referee reports on a preprint server will remain optional at this stage. Since the journals affiliated with Review Commons implement the transparent peer review process, the reviews will eventually be made public alongside accepted papers.

Scooping is nothing to fear

Review Commons managing editor Sara Monaco is often the point-person for prospective authors. Sara addresses their concerns during submission inquiries, as well as at multiple events and workshops. “The main concern of authors who are hesitant to adopt preprints is the fear of being scooped,” she says. ASAPbio’s Executive Director, Jessica Polka, concurs:
“The fear of scooping is a major deterrent to any kind of open science practice, including the use of preprints.”

From the point of view of other scientific fields, it may seem like an odd concern. Preprints have a longer history in Physics, a field where an online preprint server, arXiv, was established three decades ago, in 1991. Paul Ginsparg helped launch arXiv. When ASAPbio asked Ginsparg if scooping was a big obstacle to the use of preprints in Physics, he replied: “It can’t happen, since arXiv postings are accepted as date-stamped priority claims.” This is also true in the Life Sciences, where preprints posted to reputable servers like BioRxiv receive a Digital Object Identifier (DOI) and are citable, searchable, and time-stamped (and most major funding agencies are now preprint-friendly). As Sara puts it, in a priority dispute, “it’s better to have a preprint than not to have it; it’s not neutral, it’s an advantage.”

“It’s better to have a preprint than not to have it; it’s not neutral, it’s an advantage.”

Nonetheless, the publication of peer-reviewed journal articles remains an important milestone for most biologists. “The scoop protection element is particularly exciting because it means that journals recognize preprints as evidence of priority of discovery, which is essential to help authors be confident that when they are preprinting and sharing their work, they are going to be recognized by the community,” said Jessica. Many of the Review Commons affiliate journals already had some form of scooping protection in place for preprints. What our new policy provides is a uniform set of guidelines applied across 17 journals for Review Commons manuscripts: four months from the first posting of the preprint.

Authors now have the chance to start the scooping protection clock at two different times. As Thomas says, “They can post it upfront,” or they can wait until they have their reviews and have crafted their response before posting their preprint. Thomas stresses that authors have the chance to pull out if they have second thoughts. “We didn’t want to impose the publication of preprints to enter the system. It was also important for us that authors be given the time to reply to the reviews and maybe fix some of the things that have been spotted by the reviewers before posting the preprint. It’s fine for authors to read the comments of reviewers and decide on their own if they are really ready to show their work to the public.”