These documents were intended for discussion and feedback from meeting participants (in-person and on-line) and are not and were not intended to be final signing documents.  Each attendee voted privately through a web interface after listening to the morning discussions on these issues. We received a number of specific editorial suggestions on these documents, which are not reflected in the documents shown below (they are the original versions shown for voting). We will likely incorporate some of the suggested edits into a future version, which could be available for broad signing.

The results of independent voting on these draft documents provides consensus support for an important role for preprints in scientific communication in biology. 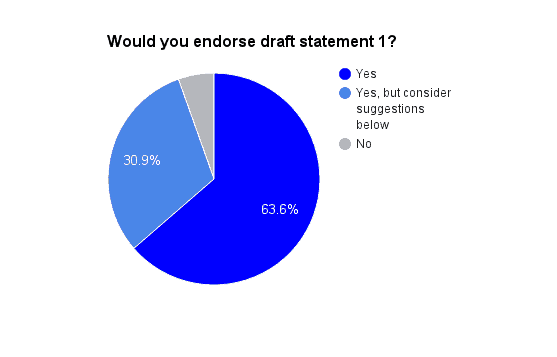 55 responses. Of the three “no” responses, all listed caveats for the response. Two wrote that they cannot endorse because of their position in a government agency and one wrote that they would endorse if changes were made. Many comments (~10) centered on “1. Recognize that the work posted on a preprint server is not peer-reviewed.” ~7 responses were from those participating virtually. 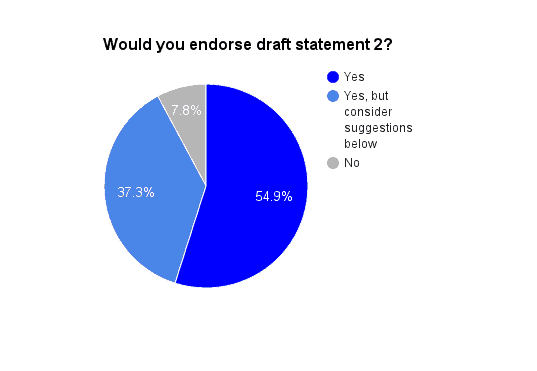 51 responses. Of the four “no” responses, only one did not list caveats for the response. Two wrote that they cannot endorse because of their position in a government agency and one wrote that this was intended for publishers and not scientists. Many comments (~12) centered on paragraph beginning “When posting an article on a pre-print server or a preprint in a repository, we recommend that researchers…” ~6 responses were from those participating virtually.

Draft statement 3: use of preprints in job applications and promotions

37 responses. Of the three “no” responses, two did not list caveats for the response. One response was from someone who wrote they could not endorse because of their position in a government agency. Many comments (~17) centered on paragraph beginning “A preprint from a preprint archive could be argued to be superior to a published paper for our evaluation…”  ~3 responses were from those participating virtually.