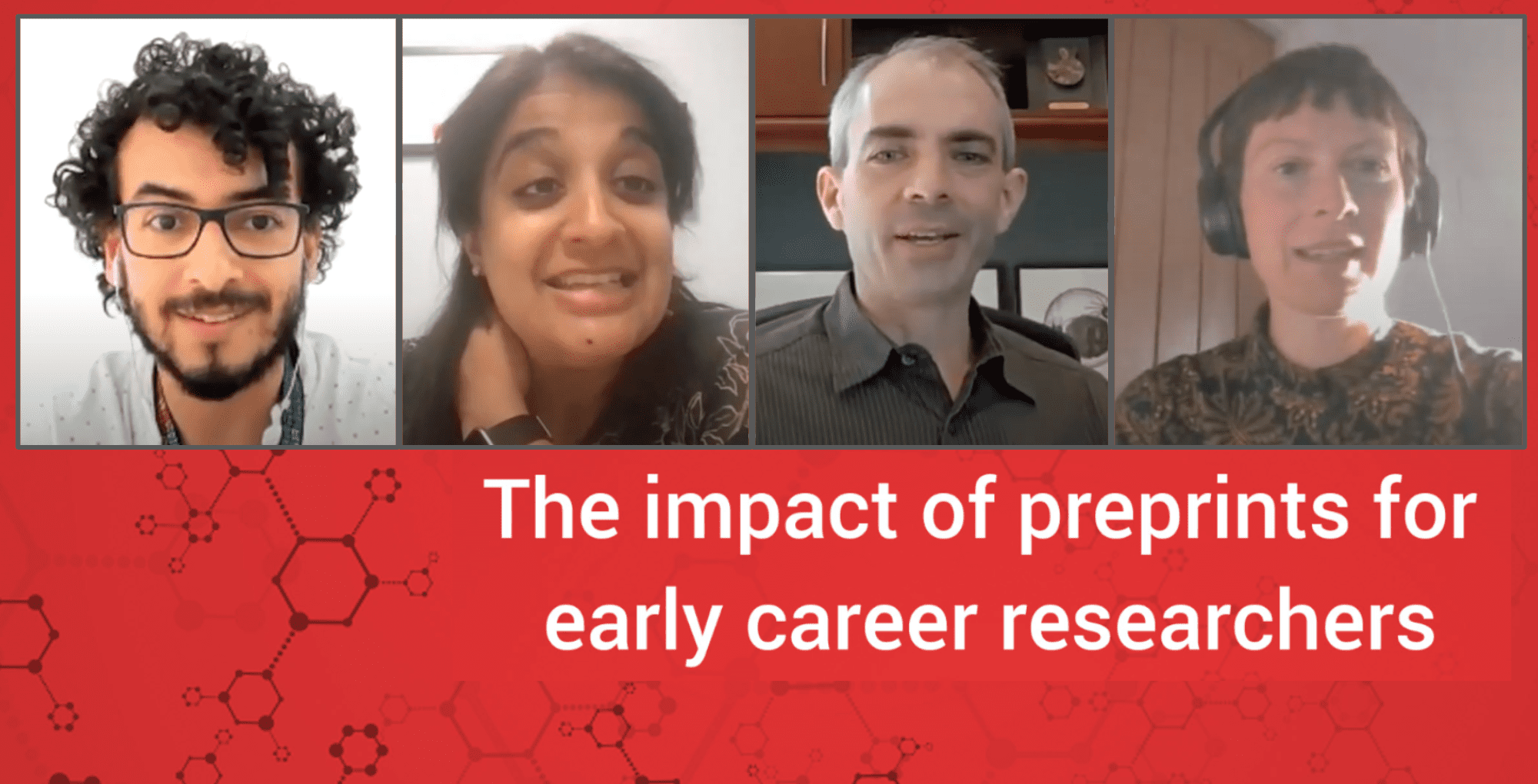 On October 6, we gathered virtually for a lively discussion about the benefits of preprints for early career researchers. The event was an initiative by the ASAPbio Fellows Keti Zeka, Nafisa Jadavji, Gabriela Nogueira Viçosa, Osman Aldirdiri and Eider Valle Encinas. Through this webinar, the Fellows aimed to raise awareness about preprints but also provide early career researchers with tips and information on how preprints can be a tool not only for the dissemination of their work but also for their career path. If you missed the event, you can catch up with the recording, and we also summarize some of the items discussed below.

Keti moderated a discussion with four speakers who shared their experience with preprints:

João Victor Cabral-Costa (University of São Paulo) shared how as a PhD candidate he became involved in discussions about preprints through the ‘Evidence-based beer’ initiative – which combines science and science communication discussions with a pint at a pub. João intends to preprint the work from his thesis and he proactively introduced preprints in the journal clubs he is involved with.

Nafisa Jadavji (Midwestern University & Carleton University) is an early Principal Investigator and has preprinted all papers since starting her research group. Even though her university does not yet have a policy on preprints, Nafisa includes preprints in yearly reviews and intends to continue doing so as proof of productivity.

Iain Cheeseman (Whitehead Institute) described how science communication has evolved since he started his career: when he was at graduate school publishing required printing four copies of the paper and sending those to the journals via Fedex (the ‘Stone Age era’), by comparison today scientists can share papers via preprints in a matter of days. Iain views the control around the date of dissemination that preprints afford as a major benefit for researchers, for example, for the purposes of job and grant applications. Iain also highlighted the value of feedback and how community comments on preprints have helped shape some of the projects in his group.

Hannah Hope (Wellcome Trust) highlighted preprints as an open, flexible and prompt communication tool that reduces barriers for authors to publish and for readers to access and comment on the latest findings. Wellcome believes researchers should be empowered in how to communicate their research and this funder has recommended preprints since 2017.

In the discussion, the speakers shared tips for early career researchers who may want to discuss preprinting with their supervisor and group members:

The speakers highlighted that while there may be initial hesitation about trying something new, it is often the case that once a group tries preprints once, they adopt them for future papers. The panelists also highlighted the power of individual voices in bringing change: Nafisa intends to pursue conversations at her university about having a policy on preprints; others can do the same at their institutions. There are examples of grassroot initiatives that have influenced change at institutions and funders, each of us have power to advocate for change.

Discussing the implications for early career researchers in different geographical regions, the speakers highlighted that preprints bring opportunities to open collaborations with groups in different regions, and noted that by their open nature, preprints not only broaden who can participate in dissemination, but also who can be involved in the conversation about the work.

We thank all the speakers for sharing their experience and all attendees for an engaging discussion. If you are an early career researcher, we would be interested in hearing if you implemented any of the tips discussed at the webinar, or if you have other suggestions! You can also find further information and resources at our Preprint Resource Center.