Requesting your feedback: how should life scientists set standards for preprints?

You are here:
ASAPbio newsCentral Service 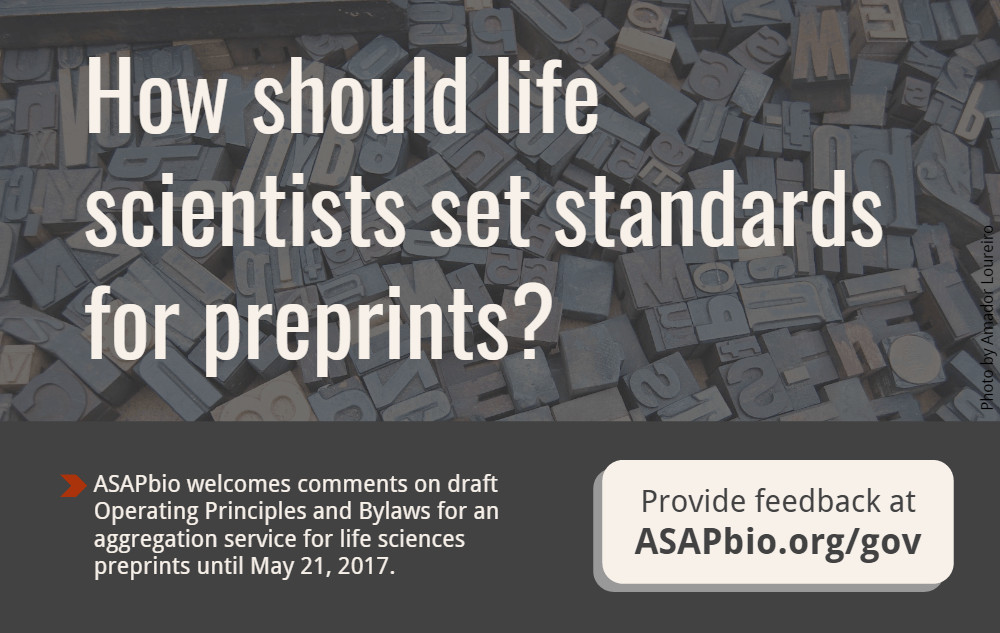 May 10, 2017 update: ASAPbio has announced a four-month suspension of the RFA process to reassess the preprint ecosystem and community needs.

Preprints (scientific manuscripts that have been posted prior to completion of peer review) allow for the direct exchange of knowledge between scientists. They constitute a global public good that promotes scientific progress. However, preprint servers, which have a 25 year history in physics, are relatively new to the life sciences, and their recent appearance has raised many questions about how they should best be used. What content should constitute a preprint? What type of information (metadata) should accompany preprints? How should they be licensed? How should preprints be screened? How should preprints and journals interact in productive ways? How should servers handle ethical issues such as human subjects research? These issues are examples of many that have been raised, and more will undoubtedly arise as scholarly communication evolves in the future. Rather than “hard wiring” rules for preprints now, we need to consider a thoughtful mechanism for ensuring that preprints develop and adapt to serve the scientific community, both now and in the future.

Currently, preprints in the life sciences can be found on several different servers and platforms (bioRxiv, arXiv q-bio,  PeerJ Preprints, F1000Research, figshare, preprints.org, and more are on the way). A diversity of preprint servers offers more choices for authors, but each has its own metadata, formatting, licensing, screening, and preservation standards. Each makes decisions according to its own board or advisors. Collectively, this can make it more difficult to know which servers conform to policies and technological standards requested by funders, and which ones will be most visible to scientific peers.

The provisionally-named Central Service is a proposed aggregation site similar to PubMed Central. It would provide convenient access to a corpus of life science preprints for both humans (via a search interface) and machines (via an API and bulk download). This will ensure consistent access to preprints for purposes of archiving, text and data mining, and development of other services. Moreover, the central service will be established with a community governance structure to make it responsive to the needs and developing standards of the community.  ASAPbio has received a grant to catalyze the development of this service, and we are also working with 11 other funders to establish funding over a 5 year period. We’ve released an RFA for service providers, and expect the technical components of the service to launch in 2018.

However, the technology of the service must be complemented by outstanding leadership and oversight by respected members of the scientific community. Each depends upon the other; the cart and horse must be hooked up together. It is critical that a mechanism for community governance begins operation prior to or at the same time as the Central Service.

What can we learn from other organizations with similar missions of serving the scientific community? Many such organizations operate through governing bodies composed of elected or appointed members from their relevant scientific community. These governing bodies make decisions according to bylaws, which effectively serve as a written constitution for that organization. Even though the elected officials turn over, the bylaws ensure that the organization maintains its operating principles over time. Virtually all scientific societies have established bylaws and elect a governing body. Some scientific resources, such as the Protein Data Bank and the preprint server arXiv, also operate in a similar manner. However, scholarly communication in biology currently lacks community governance; decisions are largely made by individual publishers or mandates by funding agencies. While preprints are just starting to gain acceptance in biology, now is an opportune time for the creation of an independent, scientist-led governing body for preprints with transparent governance processes similar to those of scientific societies and community repositories.

To prepare for this, ASAPbio has worked with an international task force composed of ~30 scientists from a variety of fields and career stages, as well experts in scholarly infrastructure, to draft Operating Principles and Bylaws for this governing body. Representatives from the Funders Consortium also have provided valuable edits and feedback on this document.

Now is the time for communities of life scientists to establish a governance structure for preprints, and we are asking for your input. Please provide your feedback on the draft Operating Principles and Bylaws by leaving comments and suggested edits in the Google Doc. You may also email jessica.polka@asapbio.org, but we strongly encourage you to leave comments publicly in order to stimulate a dialog among stakeholders.

One point on which there has been considerable discussion and no clear consensus is the definition of the community that votes to elect Governing Body members. Should it be individuals who have submitted a preprint, those who have published a scientific paper in the past 5 years, or people holding an ORCID number (for which there are no prerequisites)? Please leave your thoughts on this important issue in the comment section below this post.

We look forward to hearing from you!