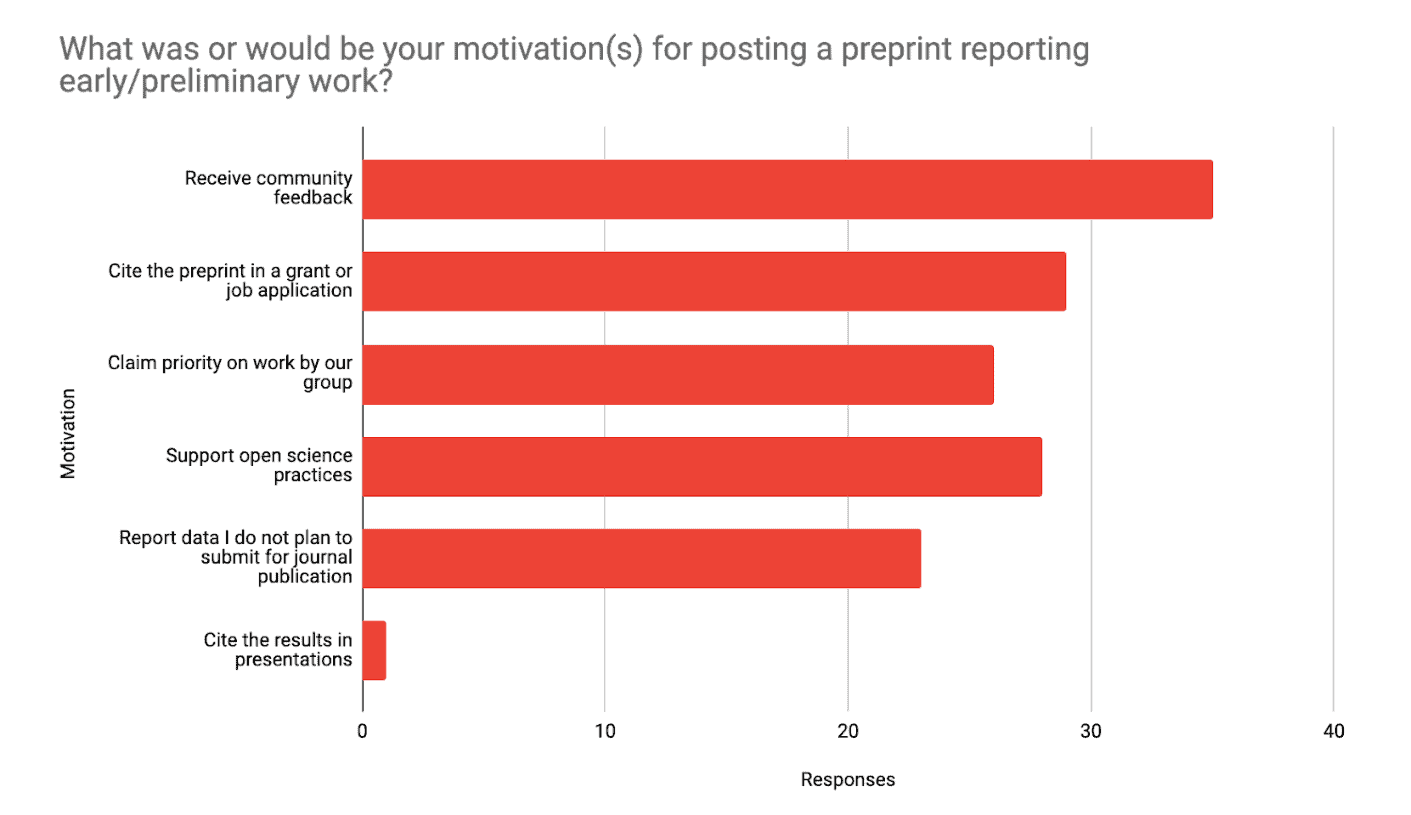 In line with our mission to accelerate research communication, we believe that preprints can provide a valuable tool to accelerate research if used to share ongoing or preliminary work well in advance of journal submission. To inform how we can best support early sharing of preprints and understand what concerns may arise about this practice, we ran a survey asking for input on the motivations, potential concerns, and the type of feedback preprint authors wish to receive when posting their preprint well in advance of an eventual journal submission. This survey is also part of the ‘Preprints in Progress’ project in collaboration with ICOR (Incentivizing Collaborative and Open Research), which seeks to gather evidence around the prevalence of early preprints and to collect researcher experiences with this use of preprints.

We received 54 responses to the survey. A majority of respondents (43) had previously authored a preprint, however, only a minority of preprint authors (7) indicated that they had posted a preprint reporting early work, suggesting that this use of preprints is still relatively uncommon.

The main motivation noted by respondents for posting an early preprint is to receive feedback from the community. This was followed by the ability to cite the preprint in a grant or job application and support for open science practices.

When asked about the type of feedback they would be interested in receiving for an early preprint, the highest ranked option was opportunities for collaboration with other groups working in a similar area. Respondents were also interested in feedback that could help shape the next steps of the research, in-depth comments on their methodology and whether the community considered the results of interest in the field. Options related to journals such as feedback to polish the paper for journal submission or editor invitations to submit were selected by a smaller number of respondents.

We also sought to understand what concerns may arise in the context of posting a preprint with ongoing work or well in advance of journal submission. Three quarters of respondents noted the possibility that results or conclusions from the study might change after more work was completed as somewhat or very concerning, this also tied to some of the free-text responses provided which noted concerns about incorrect results or misinformation propagating if an error was overlooked or results changed in later versions of the paper.

Concerns about reducing the novelty or impact of a more complete story and around scooping were also noted as somewhat or very concerning by two thirds of the respondents, while any impact on intellectual property claims was on the other hand not viewed as a concern by a majority of respondents.

In additional comments provided via the survey, the respondents also mentioned concerns around potential reputational damage for the group if posting work that could be perceived as careless, unfinished or which included errors or oversights, as well as the additional burden of preparing an earlier version of the paper in addition to that intended for journal submission.

We thank all those who contributed to this survey. While we acknowledge the limited sample size, the survey already highlights a few potential elements related to the use of preprints to share early work. This is still a relatively uncommon practice, and thus, it will be important to better understand how researchers are approaching it and what benefits they may get from sharing their research early.

Interestingly, the survey results suggest that when posting early preprints authors are mostly interested in engaging with their community in the form of collaborations and suggestions for future lines of research. It will be worth exploring how these benefits of early sharing of preprints can be maximized to facilitate interactions and connections across community members. Such connections and community feedback can also help mitigate some of the concerns around the possibility of the paper evolving over time, so we will seek to find avenues to facilitate opportunities for collaboration and feedback for authors of early preprints.