You are here:
ASAPbio newsPreprint Review 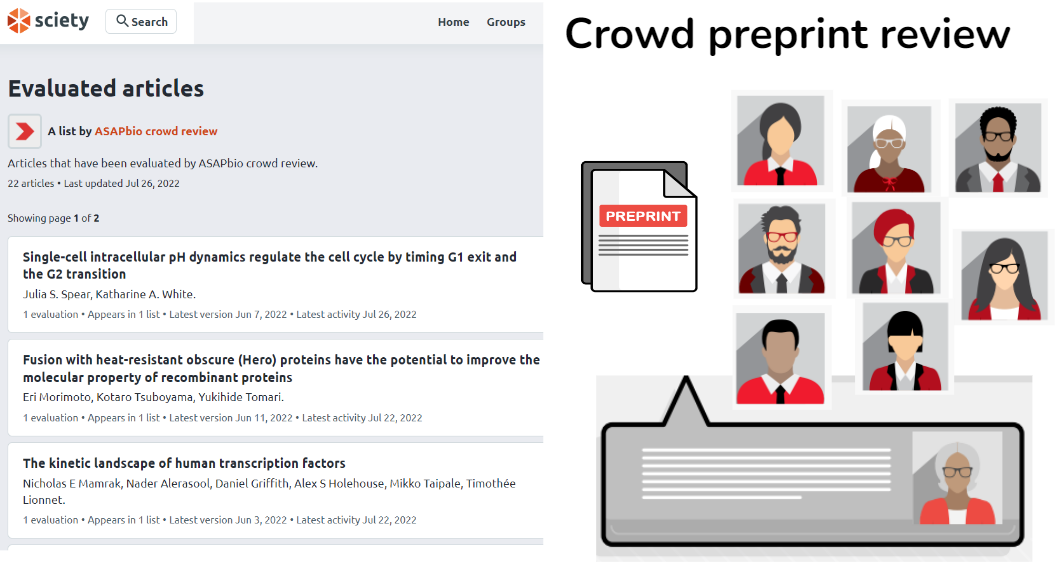 At ASAPbio we believe that there are many benefits to public preprint feedback: comments that can help authors improve their work, opportunities for early career researchers to develop review skills, and further context for non-specialized readers, among others. Since last year, we have been supporting this important activity by coordinating public reviews on preprints developed collaboratively by community members.

Through our crowd preprint review activities we seek to draw on the collective input of a group of commenters who each can comment on the preprint according to their level of expertise and interest. We are midway through our activities for 2022 and we wanted to share an update on our progress.

What have we accomplished so far?

We had a great response from the community with over 120 crowd reviewers signed up so far, with strong representation of early career researchers. We have three groups which complete reviews of preprints in each of the disciplines below:

For each of the groups, a group of ASAPbio Fellows and partners from SciELO Preprints are involved in selecting preprints to review and summarizing the comments received. They also provide regular feedback on aspects of the process that can be adjusted or improved.

We circulate a new preprint to each group every week and invite comments via a Google document. We have seen a great level of engagement from reviewers, and are particularly pleased to see the interactions among reviewers in the collaborative documents, where they provide comments and feedback to each other, not only about the preprints but also about queries that may arise during their review.

The commenting period for each preprint is open for two weeks and at the end of that period we synthesize all the comments received into a single report. This synthesis is shared with the authors, and the responses we have received so far from preprint authors have been positive about the feedback received and how it could be incorporated into a future version of their paper.

We also post the synthesized reviews publicly next to the preprint. We have posted 12 public reviews – four for each group, you can see the reviews on bioRxiv preprints via the aggregator of preprint evaluations Sciety – and we have additional reviews on the go that we will share publicly soon.

Because the reviews are posted publicly, the preprint authors can also respond publicly to the comments, and we were pleased to see authors’ responses for reviews we posted, for example for the preprint ‘ERK pathway activation inhibits ciliogenesis and causes defects in motor behavior, ciliary gating, and cytoskeletal rearrangement’.

Our activities will continue until the end of August so we’ll carry on posting public reviews in the coming weeks as they become available. Our invitation to participate as a reviewer remains open for the duration of the activities. Interested? Sign up to participate in our review activities here.

We also invite authors of preprints interested in receiving feedback on their work to indicate so via Twitter or to contact us directly, as we would be happy to include their preprint in the roster of papers to review.