Make your preprint open with purpose 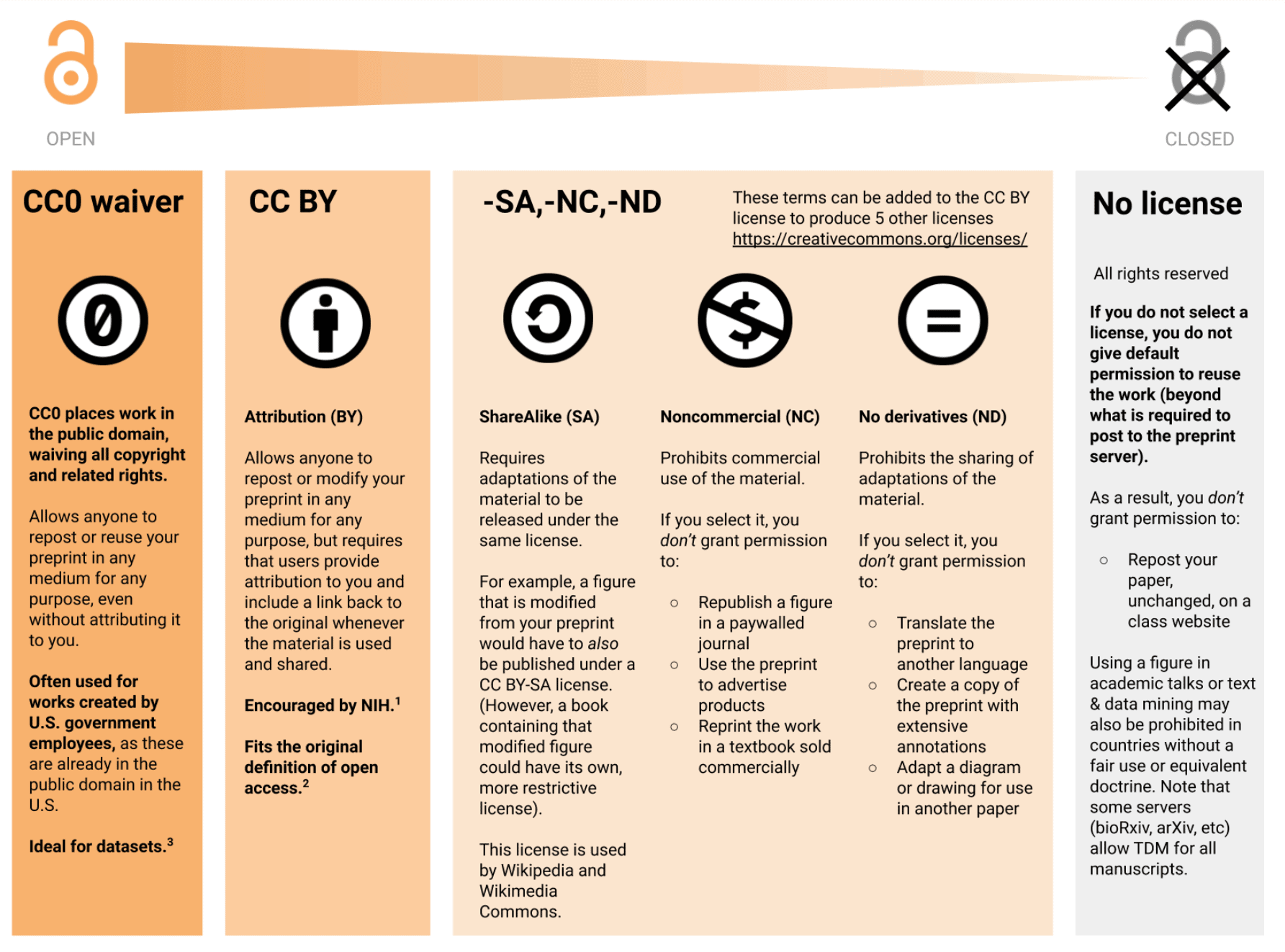 This week marks Open Access Week 2020, which is running with the theme “Open with Purpose: Taking Action to Build Structural Equity and Inclusion.” The theme provides a reminder that openness in science communication is a means to other uses rather than just an ultimate goal in itself. The same principle applies to preprints; we want to build on the benefits of faster communication that preprints bring to ultimately allow science to progress faster and researchers to receive credit for their work earlier.

Preprints are usually considered a mode of open science communication, however, whether a preprint is fully open access (rather than just free to read) will depend on whether the license under which it is posted allows redistribution and reuse.

Licensing in the context of scholarly publications can be a confusing subject (McKenzie, Nature News), there are a number of licenses available and there can be also different licenses applied to different versions of the paper available, for instance, as a preprint, as an accepted author version, as the final version of record at the journal. What does this mean regarding licenses for the paper? It can sometimes be tricky to have clarity around licensing for journal publications, and similar questions arise for preprints: in the #biopreprints2020 survey we ran earlier this year, 56% of the respondents scored ‘Uncertainty about copyright and licensing of preprints’ as concerning or very concerning. Here we highlight some of the common concerns we hear, for a more in-depth guide co-authored with representatives from Creative Commons and other organizations, please see our Preprint Licensing FAQ.

The benefits of open licenses

Licenses matter in order to ensure there is clarity on the uses allowed at the time of posting, but some researchers may be unaware of the license options and their implications. Creative Commons has developed a set of public copyright licenses that enable the free distribution of copyrighted work, the type of Creative Commons license applied to the preprint will provide different levels of openness for reuse options:

The licenses offered at preprint servers vary. Servers such as Authorea, Research Square, preprints.org, F1000 and the Open Research platforms require authors to post content under a CC BY license. Other preprint servers, such as biorxiv, medRxiv, ChemRxiv or OSF Preprints, provide authors with a number of license options ranging from CC0 or CC BY to no reuse (details on licensing options at individual servers are available at the ASAPbio preprint server directory).

Options that allow reuse (CC0 and CC BY) maximize the value of the preprint and ensure it can be widely disseminated and reused. Under these licenses, it is more likely that readers will share the preprint with others, for example, by hosting a copy on another website or using a figure in a presentation, or perhaps they may choose to translate it or use it as part of educational materials, making it accessible to wider audiences. Increased dissemination may bring additional citations and thus boost the impact of the work (for journal articles, open access has been associated with a higher number of citations, Piwowar et al.). Using open licenses also aligns with requirements by several funders, for example, the US National Institutes of Health encourages CC BY or CC0 for preprints, and the Gates Foundation encourages deposition on a preprint server under a CC BY 4.0 license. On the other side of the spectrum, if there is no license, the allowed forms of reuse are unclear and a reader seeking to reuse the preprint will need to approach the author to request clarification and/or permission. This additional step introduces delays, which can undermine the benefit of preprints to provide rapid dissemination of research findings.

Some researchers may have concerns that the posting of papers under open licenses may increase the risk of plagiarism. Misappropriation of other’s ideas or text is a breach of research integrity and publication ethics, and a practice to be condemned. This is however not an issue specific to open licenses or to preprints; instances of plagiarism can take place in the context of articles with different licenses. Moreover, copyright covers only creative expressions, not facts or ideas themselves, while plagiarism concerns all of the above. There is no evidence that posting a paper under an open license increases the risk of the work being plagiarized; CC licenses require attribution to the source and thus credit to the original author.

Another concern voiced relates to the possibility of work shared under CC BY being reused by others for financial gain or for uses the original author does not endorse. Unless the authors select a CC license including the NC (noncommercial) term, CC licenses allows reuse for any purpose, including ones the author may not have envisaged or necessarily agree with. Commercialization of material available under CC BY, while allowed provided the license requirements are met, can raise moral questions and thus are likely to impinge the reputation of the reuser. If a situation arises where a preprint shared under CC BY is reproduced in manners the author does not want to be associated with, the author can check if any license violations have taken place, in which case the license terminates immediately and the reuser can no longer reuse the work, or the author may choose to dissociate themselves from the reuse by requesting that attribution from the paper is removed (see ‘what recourse does an author have’ under https://asapbio.org/licensing-faq).

Authors who post a preprint under a CC license can publish subsequent versions of the paper under a different license or even assign the copyright to a publisher (https://asapbio.org/licensing-faq). The publisher’s licensing or copyright terms cannot revoke a license applied to a preprint.

Many journals in the life sciences operate editorial policies compatible with preprints and will consider work previously posted as a preprint. While generally any preprint license is accepted, some journals include license-related requirements in their preprint policies, so authors should check the journal policies prior to completing the submission.  We are not aware of any publishers that prohibit open licenses on preprints, but some have required authors to select (and pay for) an open access option for the journal version in those cases.

Some preprint servers allow authors to post ‘post-prints’ or the ‘author accepted manuscript’ (draft of the manuscript after review), authors may opt to deposit this version at a preprint server as a green open access copy of their manuscript. Some preprint servers (e.g. arXiv) allow the posting of post-prints while others do not, for instance, bioRxiv and medRxiv only accept papers before they are accepted at a journal. Therefore, authors should check the license or ‘self-archiving policies’ of both preprint services and journal publishers.

Licenses as an informed choice

An analysis of bioRxiv preprints by Daniel Himmelstein in 2016 showed that only 17.8% of the posted preprints had a CC BY license, and a more recent analysis of bioRxiv and medRxiv preprints in the four initial months of the COVID-19 pandemic reported that no license and CC BY-NC-ND remained the top license choices (Fraser et al.). The broader distribution of licenses for preprints in the life sciences is likely to look slightly different from this given that some preprint servers only allow CC BY, but those data suggest that there is still some way to go to maximize the value of preprints by making them available through open access licenses.

License options matter to maximize benefits of faster, more effective, and more diverse communication of scientific work via preprints. We encourage all researchers and preprint readers to discuss license options and to share license information with their collaborators. Considering options before the point of submission can help teams collaboratively make informed decisions on the appropriate level of openness for their preprint.