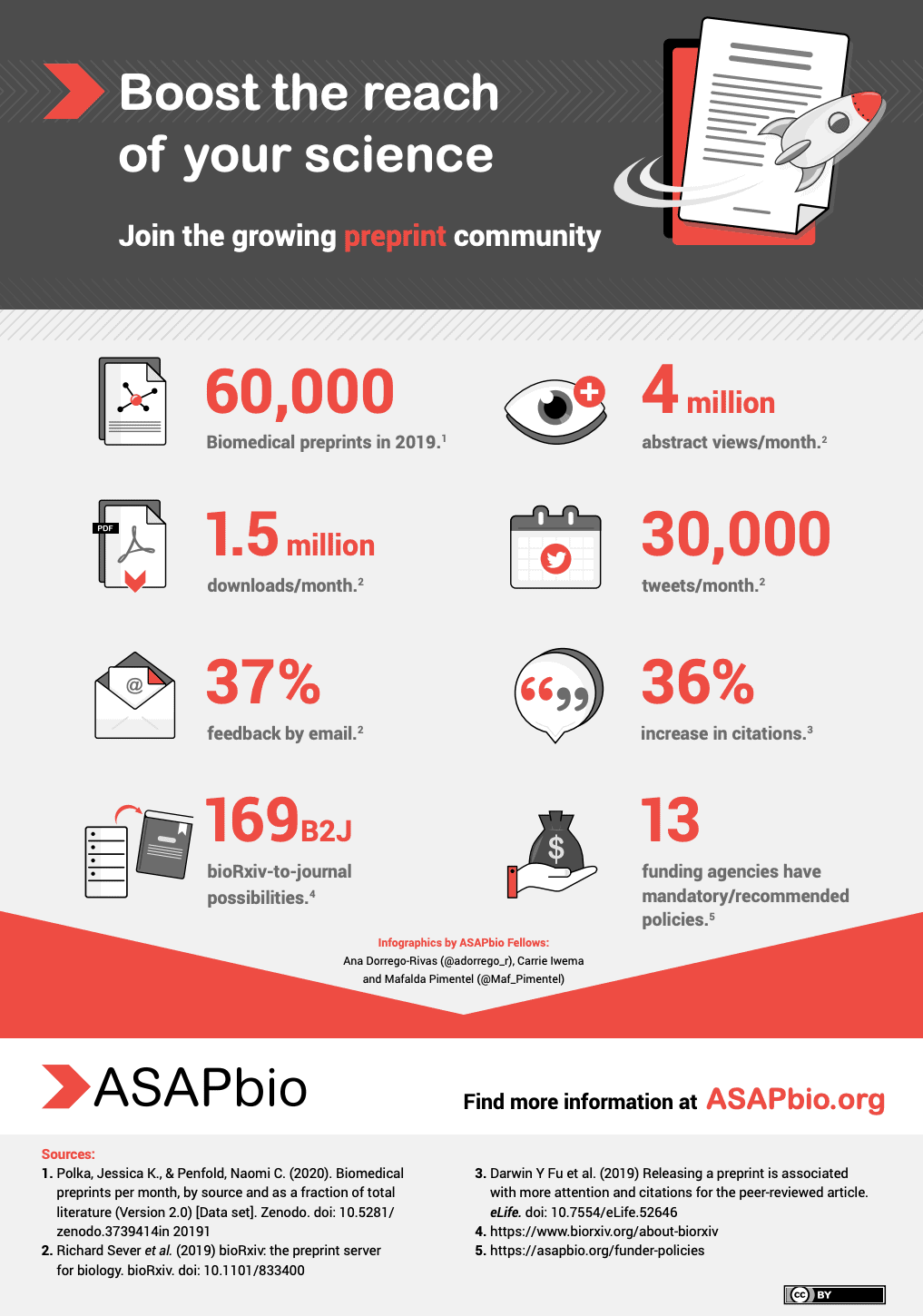 Having to isolate due to a pandemic can also have some silver linings. Forcefully away from the bench, I had no more excuses to evade a question I had been increasingly interested in – how are preprints shaping the present and future of science?

Not long after I became invested in the topic, a call for the first edition of the ASAPbio Fellow program was out. I had been following ASAPbio since I first interacted with one of its ambassadors on Twitter. I endorsed ASAPbio’s mission and values, so I immediately knew I had to grab this timely opportunity. In a matter of days, an energizing group of 26 Fellows was having its introductory meeting and choosing preprint-related projects to develop.

One of the project proposals instantly caught my attention – to create preprint-related infographics. The project involved developing visually engaging content to promote preprint-related information, and this captivated me because it would require creativity all while learning more about the preprint landscape. Additionally, I believe in the power of graphic materials, such as the posters spread around my institutes’ walls which shaped me as a scientist. It was through those that I first learned about eLife and their innovative publishing system, and that I became aware of all the training, meetings and initiatives organized by institutions such as EMBO/EMBL, Janelia Farm and Cold Spring Harbor Laboratory. Thus, seeing the lack of preprint promotion (and discussions) around me, I chose the infographics project for its immense outreach potential.

Outreach was indeed the main motivation of our enthusiastic infographics team, composed by Ana Dorrego-Rivas, Carrie Iwema, myself and our program manager Iratxe Puebla. Our strategy came almost naturally, after seeing a couple of ASAPbio presentations with impressive preprint metrics collected by several studies. Seeing how impactful those numbers could be, especially to scientists, we decided to use preprint data as a selling point. Of note, the info shared by the ASAPbio Community members through Slack was also (and still is) a constant source of information.

The next step was to dig into the literature and resources, gathering all the interesting facts and information in order to group them into different topics. Perhaps unsurprisingly, our main source was bioRxiv itself: the information on its website and its usage reports, as well as preprints about preprints (including the bioRxiv user survey results). We decided to use data for the completed year of 2019, as preprint posting had already boomed before the pandemic. Once we had defined a couple of outlines, we started experimenting with the design. Those early drafts allowed us to get valuable input from Jessica Polka and several of the participants of the #biopreprints2020 workshop. To our delight, ASAPbio gave us access to the graphic designer Bonita Jacobs, who matched our materials with ASAPbio branding.

After much tweaking, this was the final result, and you can access each infographic on the ASAPbio Preprint FAQ page:

*The infographics have also been translated to Spanish, French, Italian and Portuguese, translations will be posted shortly on the ASAPbio website.

The ASAPbio Fellows program was a rewarding experience. Not only were we exposed to the latest facts around preprints by interacting with a vibrant community, but we also produced material useful to everyone involved. If you have suggestions for other useful resources, contact ASAPbio as I am sure they’ll be happy to help.

As I am writing this post from home, I can’t wait to get to the lab to print these out and spread them all over my institute. If you are a preprint advocate, or even if you just want to start this conversation around you, feel free to share them digitally or as a printed version. Let’s give preprints a little push and accelerate the sharing of science!

Survey: how early would you preprint and what feedback would you like?
2022-02-16