How to foster a positive preprint feedback culture: From FAST principles to implementation 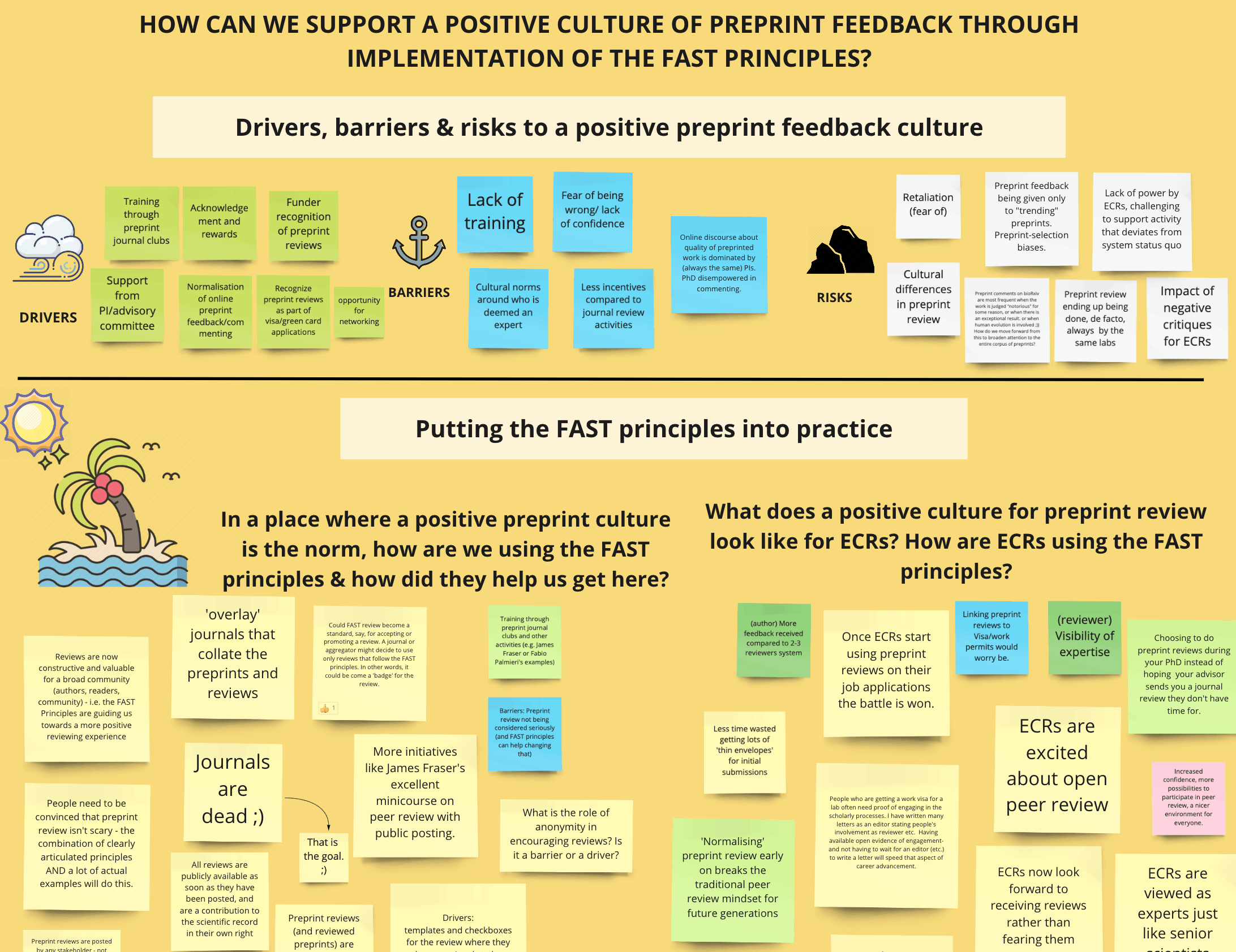 As Chris Jackson pointed out in the first session of #FeedbackASAP, preprint feedback is part of the collaborative culture of science. A positive culture of comments and review of preprints brings many benefits to the scientific process, but what does this culture look like in practice?

We dedicated one breakout session during the #FeedbackASAP meeting to explore questions around preprint feedback culture. During the session we focused on two main aspects: a discussion of the FAST principles for preprint feedback, and an exploration of what needs to happen so that we get to the positive culture we wish to see.

We first covered an overview of the FAST (Focused, Appropriate, Specific, Transparent) principles for preprint feedback developed by the ASAPbio preprint review cultural norms Working Group, and we encouraged the group of attendees to provide feedback on how the principles could be clarified or improved.

The attendees discussed the public nature of preprint feedback. In the context of preprint feedback, the commenter is placing the comments publicly and it could be argued that the primary audience of the feedback is the reader, and the commentary does not need to necessarily cater for the author. This brings a potential tension for the reviewer between being candid about any flaws in the work and keeping a respectful tone toward the authors; with this in mind, it was suggested that commenters should strive to be ‘honest but merciful.’

The attendees also commented on the role of different actors in the preprint feedback exchange and suggested clearly designating for whom each of the principles is intended. There were also questions about the role of journals in this context: How can journals participate in encouraging use of the FAST principles? If a journal does not operate open peer review, how should it approach feedback posted publicly on the preprint record?

In terms of possible gaps in the FAST principles, attendees suggested defining expectations for the authors’ response to any feedback on the preprint. Are authors expected to respond to feedback, and if so, what would be the appropriate avenue? Should there be some form of rebuttal/appeals process?

Another salient point in the discussion related to the role of moderation. While the principles outline behaviors to engage in feedback in a polite and constructive manner, there are examples in other forums (e.g. comments on newspaper or magazine articles) where public commenting can go off topic or diverge from collegial exchanges. There should be some consideration as to how exchanges would be moderated, what steps should be taken if preprint feedback is not completed per the FAST principles, and whose responsibility it would be to take any such steps.

In the second part of the session, we asked participants to envision a future where a positive culture of preprint feedback is the norm and to reflect on how the FAST principles helped us get there, and how they are being used in that context.

We also asked session attendees to reflect on how that culture of preprint review impacted early-career researchers (ECRs). In addition to highlighting the importance of receiving credit for preprint reviews (e.g. consideration as part of job interviews), there were also comments referring to ECRs showing enthusiasm and confidence in both providing and receiving reviews, and broader recognition of the ECRs’ expertise and valid role as reviewers. However, during the discussion, attendees noted that there were specific considerations on the impact of preprint feedback for ECRs that will need their own dedicated consideration as preprint commenting culture evolves.

In a broader reflection of how we can drive progress toward the preprint feedback culture we’d like to see, attendees reflected on the fact that we are at a relatively early stage of preprint feedback activities. At this stage, any principles should not be overly prescriptive, but rather provide broad guidelines that allow experimentation in this space. We should thus expect principles to evolve as participation in preprint review develops in the future.

The session provided valuable feedback for the preprint review cultural norms Working Group to iterate on the FAST principles and take the discussion forward about their future implementation. We thank all attendees for their contributions and we invite the community to continue to share feedback by commenting on this blog post or directly on the FAST principles document.